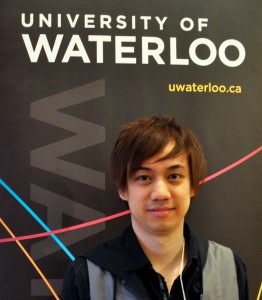 Congratulations to graduate student, Chau-Minh Phan, for winning both first place and the People’s Choice award at the university-wide Three-Minute Thesis (3MT) Competition. The 3MT is a university-wide competition in which competitors are invited to use only one slide to present their thesis in three minutes. It began at the University of Queensland, Australia, in 2008. The competition made its debut in Canada at the University of British Columbia in 2011, and was hosted by 17 Canadian universities this year. Chau competed against 170 competitors across six faculties.

For his PhD, Chau-Minh is designing a hydrogel contact lens material capable of sustaining the release of antifungal drugs into the eye, by “packaging” the drugs into nanoparticles before loading them onto the contact lens. As he explained in his presentation,

This process is similar to sending an item through the mail. You can’t just send the item without first packaging it in a suitable container, in this case nanoparticles. This way, your item is easier to deliver, won’t get damaged on the way, and will likely get to where it wants to go.

Drug-releasing contact lenses are not a new concept, but it has been a challenge to develop a material capable of continuously releasing drugs into the eye over a sustained period of days or even weeks.  The use of therapeutic eye drops to treat the front of the eye is not optimal, as the liquid is quickly washed away by tears, necessitating their re-instillation on an hourly basis.

This competition gave Chau-Minh a chance to explain his work to an incredibly diverse audience of students and faculty—enough of a challenge without the added pressure of this particular competition. As Phan explained,

Three minutes is not a lot of time to say anything. Every word out of my mouth had to be meaningful, captivating and delivered with pitch-perfect timing and meaningful hand gestures.” He went on to explain, “One fatal ‘um’ can mean the difference between winning and losing—particularly stressful for a person like myself, with a stuttering condition”.

Congratulations, Chau-Minh. You’ve made the School of Optometry and Vision Science very proud. Good luck at the provincial round of competition in Kingston, this April!