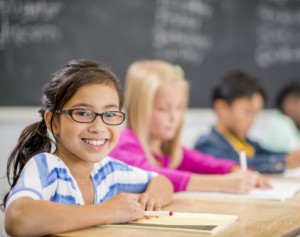 We know that the prevalence of pediatric myopia is growing worldwide, but until recently did not have any Canadian figures for comparison. CORE researchers Mike Yang, Doerte Luensmann and Debbie Jones recently completed a cross-sectional myopia prevalence study targeting school children ages six to thirteen, in the first study to measure prevalence in a non-clinical Canadian population. The work was conducted in collaboration with the Canadian National Institute for the Blind and was partly funded by Essilor. Results were presented at the 2016 meeting of the American Academy of Optometry.1

The study took place at schools in the Waterloo Region, an area that comprises two mid-sized Canadian cities representing a large demographic cross-section of people. With roots in manufacturing and farming, the region has more recently seen the growth of a thriving high-tech industry with a median age of 38 years. As of 2012, 19.1% of the population was under the age of 14.2

Automated refraction, subjective refraction and visual acuity were tested at a first study visit at participating Schools, and those with a subjective of at least -0.50D in at least one eye were invited to attend a second visit that repeated these tests after cycloplegia, along with other biometric measures. Parents provided information about their child’s activities via a questionnaire.