WATERLOO, Ontario, August 14, 2019—Educators and professionals worldwide now have access to a novel eye model that replaces traditional animal-based methods for foreign body removal—a critically important skill for clinical practice. OcuBlink, Inc., has shipped its first order of OcuBall, a polymer-based eye model that can be used for training and in educational settings to perfect the removal of foreign bodies, while eliminating safety concerns related to handling, disposal and storage of biological tissue. 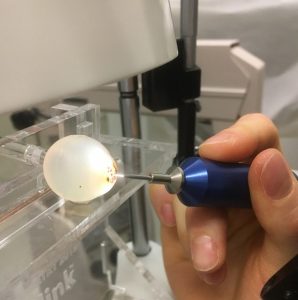 the removal of materials from the eye, such as tiny pieces of metal from the cornea. OcuBall comes premade with carbon/mild steel particles inserted on the surface of the eye to provide a realistic, safe and inexpensive clinical scenario for the practice of foreign body removal. Over time, the metal pieces can rust and form a typical rust ring, just as they do in the human eye.

Made of a biocompatible polymer-based material, OcuBall is less expensive than typically sourced animal models and it eliminates concerns of cross-contamination and biological waste. OcuBall can be stored in saline for several weeks without spoilage and has no odor.

“OcuBall feels like a human eye and simulates a realistic response to embedded foreign bodies, similar to those found in clinical environments,” said OcuBlink Chief Executive Officer Hendrik Walther, PhD, MSc, BSc Optom. “We are thrilled to share the development of a model that performs like a real human eye, giving students the opportunity to gain confidence in a situation they are likely to encounter in real life.”

OcuBlink began as an initiative of the Centre for Ocular Research & Education (CORE) and now operates as an affiliate, utilizing CORE’s staffing, counsel and laboratories. In the fall of 2018, OcuBlink was accepted into Velocity, Canada’s most productive startup incubator. Last year, OcuBlink, Inc., announced its development of a life-like in-vitro eye model that reduces  dependence on animal testing to understand the science of the eye.

OcuBlink develops sophisticated in vitro eye models for ophthalmic companies to accelerate research and development of products for the eye. These include devices for studying anterior and posterior eye disease and contact lens offerings, and its platforms have already been the subject of six conference abstracts and seven papers highlighting the technology. OcuBlink is affiliated with the Centre for Ocular Research and Education (CORE), based at the School of Optometry & Vision Science, University of Waterloo, Ontario, Canada. For more information, visit OcuBlink.com.

About the Centre for Ocular Research & Education (CORE)

The Centre for Ocular Research & Education (CORE) – formerly known as the Centre for Contact Lens Research – was established in 1988 at the University of Waterloo’s School of Optometry & Vision Science. Over the next three decades, the organization evolved from a three-person operation into a thriving hub of basic and applied research, collaborating with sponsors, agencies and academia on advanced biosciences, clinical research and education. Its uncompromising independence and results of the highest quality have been at the heart of many of the most prominent advances in eye health. Today, its approximately 50-person team serves a range of ophthalmic sectors, including medical devices, ocular pharmaceuticals, digital technology and others, with a focus on the anterior segment. For more information, please visit core.uwaterloo.ca.